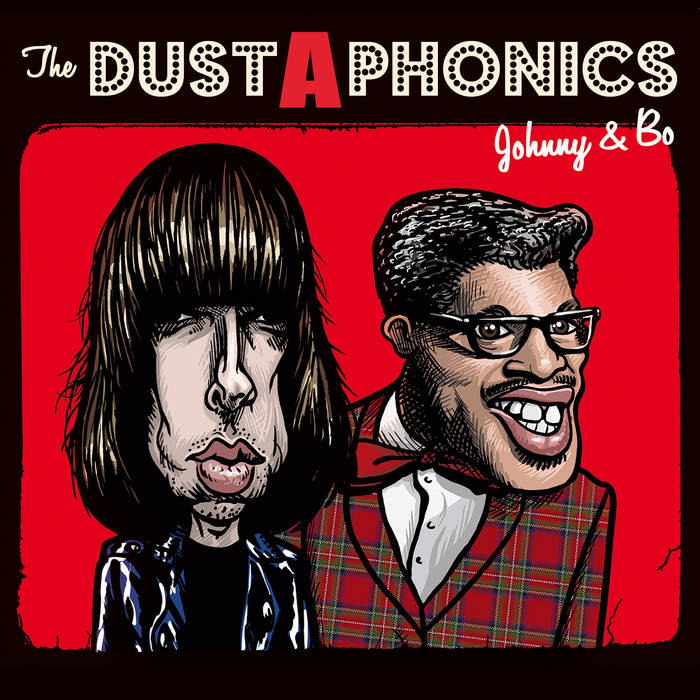 This is the 4th album from one of London Town’s hottest rhythm & blues surf’’rock’n’roll quartet. The Dustaphonics.

The title song is a tribute to two of Serrano's greatest influences: Bo Diddley and Johnny Ramone, whose unique guitar styles influenced zillions of musicians the world over, including of course all the Dustaphonics’ members.

Also included is an ode to Tura Satana (actress best known from her high-kicking jinks in Russ Meyer’s cult Faster Pussycat Kill! Kill!) Who sadly passed shortly after the first single of The Dustaphonics which she co-wrote.

There are more killer originals e.g. 2 contrasting versions of the uber-catchy “You Don’t Love Me Anymore” (an uptempo garage punk version with one foot in 1966 Texas, the other in 1977 London, and a high octane R’n’B version complete with a honking horn section) sang by Hayley.

If pounding surf is your thing, this unreleased vocal version of this Dustaphonics’ classic, the action packed “Listen To Showman Twang” sang by original singer Aina, will have you hanging 10 with your toes on the nose. Mentioning Serrano's guitar heroes!

Of course if groove is your move, you’ve probably already shaken your “thang” to the New Orleans funk of “Q Sounds Groove” sang by Hayley , as broadcast on the world’s no1 soul’n’funk radio show by the one and only Mr. Craig Charles.

“Dreams on Screen (Dolce Vita Dream)” is a laidback slice of perfect cinematic pop; ideal for kicking back and chilling to, even better with a ”Cachaça” cocktail on Copacabana beach dancing vintage surf along side an another one to get your toes tapping and your groove a-grindin’ is, a slinky version of Billy Gales/Ike Turner’s “I’m Hurting.

And as if that wasn’t enough of a marvelous mélange of musical mayhem, everything draws to crashing crescendo with a breathtaking run-through of The Specials’ classic “Gangsters”, sang by Kay and re-arranged with a surf edge by Yvan Serrano.The Dustaphonics’ “Johnny & Bo” is a de-luxe lexicon of top quality R’n’B-based music styles; we know you’re going to love this new release. Enjoy!

Published by Wipe Out Publishing Ltd 2016